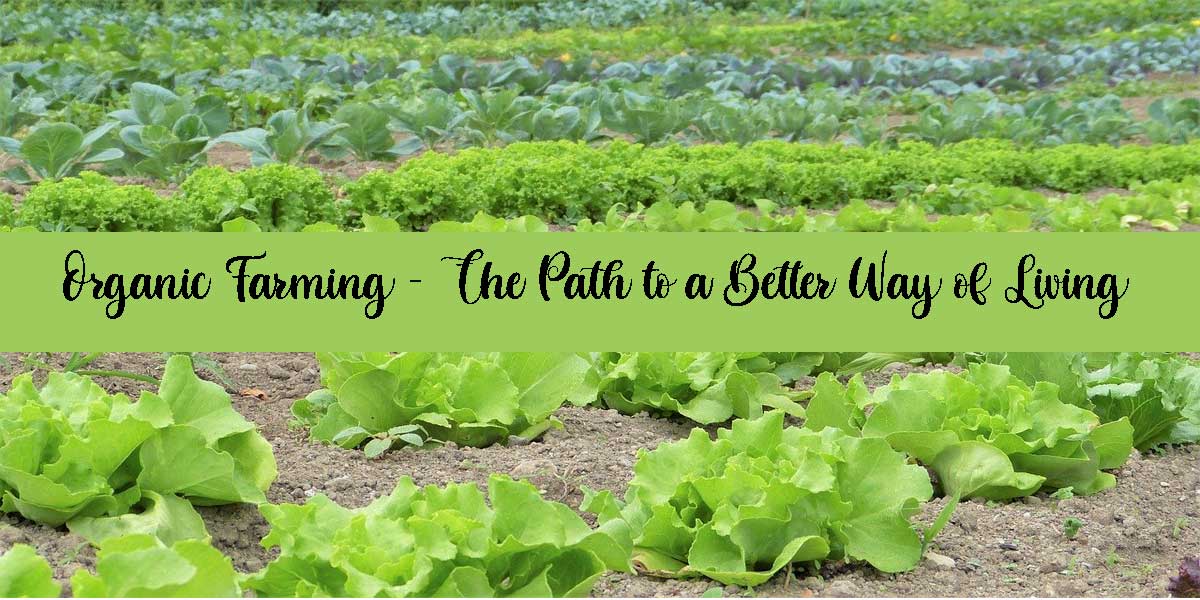 Organic Farming – In today’s time and age, where human existence is finding the right means with the help of which they can bring the many required and positive changes to their existence, organic farming is not an unknown name.

An agricultural system that originated in the 20th century, organic farming refers to a process or method of farming of crop and livestock production which is free from the use of pesticides, fertilizers, antibiotics, growth hormones, etc. All those elements that might not be advisable for the health of humans. Basically, a form of agriculture that is not just free from chemicals but also is a more pure and natural form of farming can be rightly defined as organic farming.

The History of Organic Farming

Organic farming, which is also very popular in the United States as Integrated farming and sustainable farming, was first developed by Sir Albert Howard, F.H.King, Rudolf Steiner in the early 1900s. All of them were of the same belief, that animal manures when turned into compost, crop rotation, cover crops, and biologically based pets controls were sure to result in a better farming system. Howards who was in India for a very long time was deeply impressed by the agricultural methods that were adopted by the Indian farmers to do farming. It was from India that he adopted the traditional and sustainable farming practices and spread them in many parts of the world.

With a rise in the awareness regarding the environment, general health, and most importantly the impact of pesticides and chemicals on the everyday diets of people, not only led to a drastic increase in the demand of organic food but also permanently changed and enhanced the farming structure in many parts of the world.

It is very interesting to see that just like the many parts of the world, America too seems to be smitten with organic farming and its many advantages. It is rather a thing of elation to see that there has been a jump of 56% in the rise of organic farms from the year 2011 to 2016. As per the U.S.Departement of agriculture (USDA), there are more than 14,000 certified organic farms in the country.

Even though the reports claim that California is the king when it comes to organic farming in America, it will not be wrong to say that this trend is picking up in many other parts of the country as well.

Talking about other countries, like the UK, there has been a rise of 2.7% in the total organic farming land, but these numbers have been enough to give them a good lead over many other countries in the world.

With a lot of people showing interest in organic farming in Hongkong, there has been a tremendous as well as a highly productive rise in the field of organic farming in this country. With the “organic farming conversion scheme,” it is not just the farmers who are benefitting but also the local residents.

As compared to many parts of not just the world but specifically Europe, the organic production in Ireland is extremely low. But with the farmers there realizing the worth and importance of this kind of farming, it won’t be long before this form of agriculture picks up the speed there as well.

With the consumer being not just aware but also particular about what they are eating, there has been a rise in double digits in the growth of organic goods. Today 3 out of 4 stores are selling organic products. For many years, certified organic produce in the form of fruits, vegetables, poultry, etc. is witnessing growth in demand like never before.

The many advantages of sustainable/integrated/organic farming

Other than being a hot favourite among the consumers as a healthy and preferred food choice, organic farming has also been known to be fantastic for soil and mother nature. Here is a list of factors that make organic farming a must for both the seller as well as the buyer.

The difference between organic farming and conventional farming

The biggest difference between conventional farming and organic farming is in the methods of farming that are used. Let’s have a quick look at the key differences.

The structure of organic farming globally

It is believed that the year 2018 was a year of record growth in the field of organic farming. The world not just saw a big jump in terms of the acquisition of organic lands but also tremendous growth in organic stores, supply as well as demand. Even though the United States of America seems to be the leader in the market of the world organic farming market, many other countries are using the many benefits of organic farming not just for the welfare of their countrymen but also as a great way to boost their economic growth. These rapid and ever-growing changes in the organic farming statistics are not just indicators of a global awareness but more like a foundation for the many generations to come.

From merely 77 countries in 1999 to 181 countries in the year 2017, it will not be wrong to say that there has been tremendous growth in the field of organic farming all over the world. A lot of countries and its people are understanding the many benefits of this natural way of agriculture and therefore the statistics every year are getting better and increasing at a fast pace.

Even though as compared to conventional farming, the ratio of organic farming is still low, farmers and consumers all over the world are hopeful that in the coming times this ratio is sure to get better.

Organic farming still constitutes a very small percentage of the total agricultural land in America, but the rate at which it is growing continues to be impressive.  Every year there is a significant rise in the total statistics which is not symbolic of more and more people shifting towards an organic way of living but also an indicator of a sense of awareness towards oneself and the environment in people as a whole. As per the many studies and researches conducted by the USDA organic farming is not just the means to produce goods without the use of perspectives, herbicides, irradiations, etc. but also one of the most effective ways with the help of which one can also retain the animal health and welfare standards.

The total organic farming land in Canada constitutes to be a total of 1.5%. There has been a drop from 65% to 63.8% due to the massive increases in vegetable and root crop acreage as well as the fruits and nuts acreage.

With a decline in the land used for organic farming in the UK for the ninth consecutive year, the UK is lacking behind in the total stats for organic farming land all over the world. A big reason for this remains to be the fact that almost 64.42% of the land here accounts for permanent pastures.

It is also interesting to see how people all over the world are judging conventional farming foods over organic farming foods. Even though there is a leading percentage of approximately 51% of people who say that the organic and nonorganic food is both the same, there is also a high percentage of 45% of people who claim that organic food is a better and healthier eating choice for them.

The Best colleges and universities in America for organic farming

Education is without a doubt one of the most effective and strong mediums with the help of which a person not only gets the opportunity to outstand and outshine in a particular subject but also in laying the foundation stone for a stable and productive career and future. If you are looking for an institute where you can learn the finesse of organic and sustainable farming,  then the following list is sure to be helpful for you.

Subhash Palekar a very famous Indian agriculturist, born in a small village in the state of Maharashtra, in India gained tremendous popularity in many parts of the world with his Zero-Budget Natural Farming(ZBNF). He, like many others, believes that natural farming is not just the right way of cultivation but also the process that is sure to sustain mankind in the long run. He has also been awarded the Padma Shri in the year 2016 for his outstanding and exceptional work in the field of farming.

The future of organic farming

Needless to say, there has been a noticeable rise in organic farming in the last decade. But before you choose to invest your time, energy and money into this field, it is but important that you are aware of your prospects of growth and success in this field.

Even though it will not be completely wrong to say that organic farming at any point in time will not be responsible for feeding the entire world population, there is no secret in the fact that as a career prospect, the future of organic farming and farmers is bright.  Wherever there are people who believe in the goodness of the pure form of eating, there will be a demand for organic food in the market. And with the enormous rise in awareness, the rise is here to stay.

If you are looking for the right means to produce fruits and vegetables that are not only superior in terms of quality but also cost-effective and efficient and most importantly in sync with the ecosystem, then this career option is not just going to be rewarding but also life-changing for you.